Physical Therapist Mark Rossignol was recently selected for induction into the Maine Sports Legends Hall of Honors Class of 2018.

While Rossignol was a three sport star at Van Buren High School, including being named All-State in Soccer his senior year, Rossignol has no doubt that the key factor in the prestigious honor of being selected as a Maine Sports Legend comes from his career as a physical therapist.  As 2017 comes to a close, Rossignol took some time recently to reflect on the circumstances that led to the creation 30 years ago of County Physical Therapy, commonly known as CPT, and the honor of being named to the Hall of Honors.

Rossignol graduated from the University of New England’s second class of physical therapists back in 1985, and returned to Aroostook County to begin his career.  After a few years, Rossignol was preparing to move to Rhode Island.  “As many younger professionals in this area often feel,” Rossignol explained, “I thought I had to move away to advance my career.” 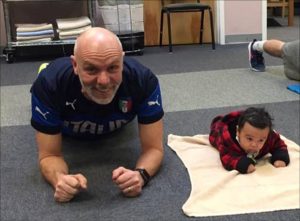 Fortunately for the residents of Aroostook County, Rossignol received some advice that Aroostook County needed highly skilled physical therapists, and that he could realize his goals by staying.  Once the decision was made to stay, Rossignol was committed to delivering the highest level of physical therapy anywhere.  “When I was in high school, I think I had a little chip on my shoulder.  When Van Buren, which was then a Class B school, traveled downstate for games, we were often mocked as hicks from the north.  So we always gave a little extra to prove we could play with them.  It made the victories even sweeter.  When I opened CPT, I always pushed a little extra so that my patients felt they were getting the best.”

When the doors of County Physical Therapy opened in September 1987 with a team of Rossignol and two employees, business started to pick up quickly.  “While we treated patients of all ages, we quickly became known as the place for injured athletes.”  Although the clinic was in Caribou, it was not uncommon to see injured athletes from all over the County, some coming from as far as Fort Kent and even Houlton.  “I know how important games were to me when I played, so I would do all I could to get athletes better and ready to play,” said Rossignol.

CPT added employees at the Caribou location, and then opened a second clinic in Presque Isle in 1997.  In the years that followed, CPT also opened clinics in Madawaska, Fort Kent, and Houlton.  “There were two common themes to each new clinic.  First, we had patients coming to us from those locations.  Second, and most importantly, we had the right people in place to grow our company.”

Over the 30 years of CPT, Rossignol estimates he has personally treated over 3,000 high school athletes.  “Some are easier to deal with, ankle sprains and other overuse strains, while injuries such as ACL tears are more involved.  As much as the physical rehab is needed, there is the mental aspect of returning from a serious injury.”  Even after 30 years, Rossignol often puts on his shorts and sneakers and does the exercises with the patients. “I want patients to know I’m in there with them.”

Rossignol is also a huge advocate of an active lifestyle.  Among his favorite activities now are cycling, Nordic skiing, and general core conditioning.  Ever the motivator, he is always willing to push people into new physical activities.  “I am lucky to love what I do, and still like to push myself, both personally and professionally.  I don’t see myself stopping any time soon.”

Thinking about the being honored as a Maine Sports Legend, Rossignol is humbled by the selection.  “You don’t think about these kinds of things.  I measure my success by getting people back on the field, back to work, or just back to living their lives.  It’s great to run into people that I treated 10, 15, even 20 years ago and catch up with them.”

Rossignol is also honored to be part of an induction class with Richard Cormier, who was the principal of Van Buren when Rossignol attended.  “Mr. Cormier was not only a great athlete and supporter of athletics, he was a great family man and role model.”

At a company wide family day celebration held in September, Rossignol thanked and toasted employees and their families and friends. “CPT would not have made it 30 years without all of you.  CPT is not just Mark Rossignol, it is all of us.”